Field Notes from the Wildernesss 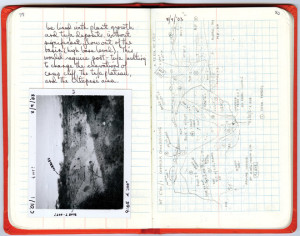 Field Notes from the Wilderness

During a particularly difficult year, my counselor said, “Jackie, I think you are in the wilderness. You weren’t expecting this move to Michigan to be so hard, and it has challenged you more than you thought possible. But what could God be doing with you here?”

I wanted to yell, “being a big jerk who is making my life miserable!!!”

Instead, I mumbled that I had no idea.

The next year was a year in the wilderness, in loneliness, in trying to figure out what God had for me there.

Lesson #1: I can’t even imagine my whininess if I was forced to eat manna every day with an occasional quail instead of wood-fired pizza and lavender lattes. I would be unbearable.

Lesson #2: I like my life to be fun and full and easy. I hate the wilderness. I hate the empty and the barren and the scarce.

And I hate facing who I am in the wilderness, hate seeing my brokenness and my sin. I hate all of that mess being exposed, hate letting others into it.

Lesson #3: Whether or not I want to admit it, God has always worked in beautiful and painful ways through the wilderness. I am not an exception to this rule.

I love this passage in Deuteronomy, when God pulls back the curtain a bit to show the Israelites a peek into what he was doing while they were in the wilderness.

“And you shall remember the whole way that the Lord your God has led you these forty years in the wilderness, that he might humble you, testing you to know what was in your heart, whether you would keep his commandments or not. And he humbled you and let you hunger and fed you with manna, which you did not know, nor did your fathers know, that he might make you know that man does not live by bread alone, but man lives by every word that comes from the mouth of the Lord.” Deuteronomy 8:2-3

That year – and every patch of wilderness since – has indeed been the testing ground, a humbling. Because I am so relational, loneliness is often the place of my wilderness, the place when I am most tempted to leave the God I love. It’s the empty spaces where it doesn’t seem worth it any more, when I am most prone to chase after other lovers, quite literally in this case.

That year turned out to be one of the most painful of my life. My circumstances didn’t change much, and the loneliness was searing. I would not wish it back.

And it’s a year when I met God in a new and raw way, where he took me to a place I would have not chosen to go and changed me in ways only the empty could.

This entry was posted in Uncategorized. Bookmark the permalink.

2 Responses to Field Notes from the Wildernesss