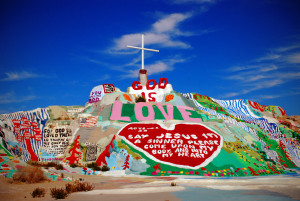 The wiry New Englander who pulled his truck up to a barren stretch of the Imperial Valley near Niland, California, felt called to the desert. The land, stretching out in vast pale ripples, bumps up close to Baja and lurks east of the Salton Sea — a lonely stretch that ignites the imagination and pulls at the soul, and causes people to stop there and live, sometimes forever.

Leonard Knight loved the Lord. His Christian faith burned hot and he did what so many others have done throughout time. He obeyed the idea that “work is love made visible” and began to build a mountain. “Love Jesus and keep it simple,” he said, living in the back of his truck in heat up to 120-degrees during the summer without running water, electricity, phone, gas or air conditioning while the 3-story adobe mountain took shape. The mountain is terraced enough to walk up, following a bright yellow path that winds to the base of a huge cross.

The mountain exudes Bible quotations: John 3:16, the Sinner’s Prayer, and the Lord’s Prayer. The bright colors shout out, but must be reapplied often to keep the inside stuffing — adobe and straw — from leaking. The occasional rain shower results in a river of paint, but the dedicated folks who have caught his vision paint it right back up again. Knight estimated that he’s used 500,000 gallons of paint, mostly “supplied by God.” As an ex-welder, handyman, painter and body-and-fender man, he never had the capital to create this folklore monument. But the gifts came, one after another, and continue even after his death.

His thirty-year effort announces “God is Love” to hoards of desert visitors. On my trip to behold the attraction, we met a Dutch couple, both atheists, who had read about it and traveled there just to see Salvation Mountain. The message and inspiration of this self-described hobo has reached thousands. The cross on top looks out as far as the eye can see.

What I love about this mountain is multifold: it’s message, it’s maker, and its contributors. Up to a hundred people a day arrive in the more temperate months to cart in buckets of paint to keep the mountain intact. If you asked many of them — probably even most — if they were believers, they would emphatically say “no!” If you asked these many people if they would ever build a mountain to the Lord, imagine the response! But here they are, year after year, hauling paint to Leonard’s mountain to proclaim “God is Love,” and “Jesus, I am a sinner, please come upon my body and into my heart” in letters at least 4-ft. high. How does God feel about this? I have to wonder if, as in Matthew 25:40, He looks smilingly upon this colorful, communal effort and says, “truly I tell you, whatever you did for (Salvation Mountain) you did for me.”

This entry was posted in Uncategorized and tagged desert, love, salvation. Bookmark the permalink.